The Great Minnesota Get Together

Betty and I went to the Minnesota State Fair on Labor Day. Our second order of business, after eating breakfast, was to demonstrate lace making in the Creative Arts building. I had my mystery stole (almost half done) and the beginnings of a nice lace-top sock. 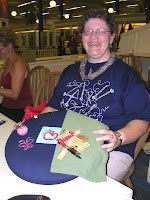 Betty brought her bobbin lace pillow to show a LOT of people how bobbin lace is made. She's incredibly good at helping people understand how it's done. Click on the photo to see her butterfly and not-quite-finished apple.

And a very nice lady named Lara, whose photo I neglected to take, demonstrated tatting. She does very nice work.

After 3 hours of demonstrating we went to the Hippodrome. Oh, I forgot, it's called the Coliseum now. Anyway the first show was Trailer Racing. There were 8 pickups with horse trailers behind them. The object is for the rider to run from the front of his pickup to the back while his partner carries the saddle. The rider takes his/her horse out of the trailer, takes off the halter, puts on the bridle, saddles the horse... 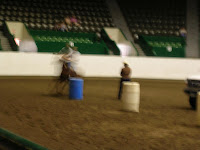 And rides as fast as possible around the arena twice. Then he/she stops behind his/her trailer, gets off, removes saddle and bridle, puts on the halter, stuffs the horse back into the trailer, and runs to the front of his/her pickup to stop the watch. Amazing. Fastest and shortest race I've ever seen. 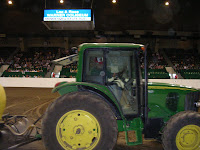 It looked like the guy driving this tractor might have been a zamboni driver. His tee shirt had a Minnesota Wild logo on it. He was preparing the arena for the Royal Canadian Mounties.

You'll have to click on this one to see the Mounties--all in a row.

That was the only time they were easy to photograph. Look at the video below to see some of their action. It was most elegant to watch. Handsome men and women riding handsome black horses. 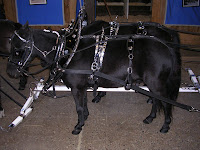 In the horse barn we visited with some of the mounties who were preparing their horses for shipping east by truck to their next state fair gig. I saw these black horses and just had to take their picture. 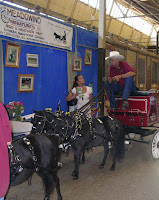 Actually, they are miniature horses. Aren't they cute? 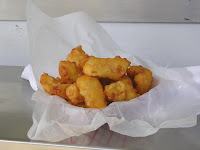 Of course, a trip to the fair isn't complete without deep-fried cheese curds. 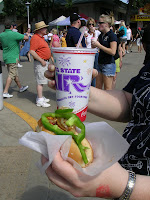 We noticed two huge piles of uncut spuds near a French fry stand. It was late in the afternoon on the last day. I hope they had somewhere to use these potatoes.

All in all, it was a very good day. Kinda hot (I think it was over 90F) and fairly humid.

Take a peek at the videos. They're short. The second one shows them performing one of their more intricate routines. (Isn't Betty's laugh contageous?)