There are three things that really bother me about other drivers. Well, OK, there are more than three. But here are the top three.

If you don't have a stick shift with a clutch, keep your left foot off the pedals. Driving with both feet causes excessive strain on your engine and burns extra gasoline. But worst of all, it's like "crying wolf." If your break light is always on, how do I know when you're really slowing down?

SUVs and pickup truck owners seem to think their lights should be aimed straight out from their vehicle. Is it cool to see so clearly into the car in front of you? In case you didn't know, you are blinding the drivers in front of you! I wouldn't want Stevie Wonder driving in front of me.

What ever happened to "Minnesota Nice"? It seems when folks get behind the wheel of their car, the very people who would never cut in front of someone at a movie theater suddenly turn into Mr. Hyde. When entering a freeway, they speed up to squeeze in front of the nearest car, even when there's a lot of room behind it. Merging is supposed to work like a zipper: one from the left, one from the right, one from the left, and so on. Take turns, folks!

As a post script, it also annoys me when people who switch lanes don't look to see if the car in that lane is approaching at a higher rate of speed. They just notice that there's no one there, right now, and pull over...slowly. I know, I know. There's a speed limit. But on a 65 mph freeway, I have never been stopped for driving 8 over. I do it in the far left lane so that I endanger only myself. Please don't pull in front of me doing the speed limit (or less), especially if there's no one behind me. Oh, and don't be surprised if I flash my headlights at you. This is a trucker signal asking you to...get out of the way!
Posted by a2z at Friday, December 08, 2006 No comments:

The "War" in Iraq

OK. Somebody explain it to me.

We went to Iraq because...al qaeda was there? As I understand it, that wasn't as true when the war started as it is now.

We went to Iraq because...Saddam had weapons of mass destruction? Well, that turned out not to be true. This sort of proves to me that "military intelligence" is a misnomer.

We went to Iraq because...Saddam is a bad guy? Well, that one is true but it wasn't the reason given when we first sent our young men and women there to be killed and maimed (physically and emotionally).

We went to Iraq because...we wanted to make life better for the Iraqis? As we have so often in the past, we tear down a country physically and politically, and promise to rebuild it later by supplying workers and money. In Iraq, however, the Iraqis are killing each other and killing the very American workers trying to help rebuild their economic infrastructure.
Posted by a2z at Monday, November 13, 2006 No comments:

I received a piece of unsolicited mail today that is so very typical of the political ads today: "SHE'S NOT ON OUR SIDE!" It took me a while to figure out who this person was that wasn't on my side and who was responsible for the mailing. Tiny 5 point type along the fold said it was paid for by one of the two major parties and the candidate (whoever that is; I haven't a clue) did not approve of nor was responsible for the ad.

So many of our ads these days are just telling me not to vote for someone and how many terrible things that person has done. There's very little mention of why I should vote for anyone. And the negative ads are pretty non-partisan. And the national party committees are paying for more of the negative ads than the candidates are.

This sort of campaign makes me want to vote against them all. Maybe I'll just vote out all the incumbents. That's not really a good idea, but right now it doesn't seem like such a bad one, either.
Posted by a2z at Tuesday, October 24, 2006 No comments:

There's a tune on the radio (Delilah's show actually) about a guy who gets bad news from his doctor. His friend asks him what he did when he found out and he listed the many things he did because he "lived like he was dying."

I went to a memorial gathering for the husband of a good friend. He was only 60 but because he'd smoked for years and chewed tobacco, he got esophageal cancer. It took a lot of months of chemo and radiation, and they thought they'd beat it. His esophagus was clear; he could eat again. But then the cancer turned up in his brain. The chemo is poison and supposed to kill the cancer. It's also hard on the body. He lost ground so thoroughly that, once he actually "gave up" it only took a few days for him to die.

So, let it be a lesson to us all, live like you were dying. Be the friend/sibling/child/parent/spouse you always thought you should be. Resentments are really meaningless to the person you resent and serve mostly to waste your time and energy. Forgive and live. Love everyone you know. Go where you've always wanted to go. Do things you've only thought of doing. Try something new and don't worry about whether you can or not. Just try it.
Posted by a2z at Monday, October 16, 2006 No comments:

Isn't it odd that we Americans have a day to celebrate the man in charge of the landing of a trio of boats which were lost. They thought they had landed in India.
Posted by a2z at Monday, October 09, 2006 No comments: 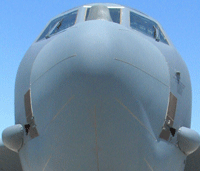 Whine, whine. I hab a code. The whole left side of my face is pressurized. I hope I still have some left over Nyquil from the last time I had a cold.
Ah, that's better. Nyquil is great stuff. I'll either sleep better, or I won't care.
^ My nose feels like this big.
Posted by a2z at Friday, September 29, 2006 No comments: 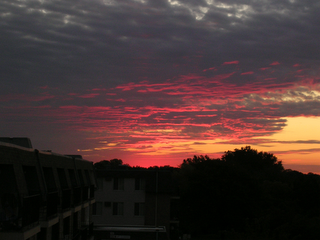 I'm not a morning person ... never have been. I've always preferred to stay up late and do creative things like tatting, knitting, writing, beading. This, of course, makes getting up early in the morning difficult. Because I have a day job and am required to get up early, I force myself to go to bed. Also because I get up early, I'm usually tired enough by 10 p.m.

The last few days, when I've walked through my dining room which has sliding glass doors looking east (I'm on the third floor), I've been treated with a glorious site. It almost make getting up worthwhile.
Posted by a2z at Thursday, September 28, 2006 No comments:

Living in a cold-weather climate gives me a real appreciation for warm days in the fall. It was in the upper 70s today, September 26, in the upper midwest. Tomorrow it will be in the 50s. Sigh. At least it will be cool enough to sleep tonight. A thunderstorm rolled through in the early evening and the temperature dropped a bit.
Posted by a2z at Tuesday, September 26, 2006 No comments:

A lot of effort required

After a great deal of effort, I figured out how to log in and create a new blog entry. I don't know why it was so difficult. It just wasn't obvious to me. And I'm computer literate.

Well, this weekend Chinatown Tai Chi Center is hosting a number of seminars and one exhibition (Saturday, September 23, 10:30 a.m., in case anyone is interested). Grandmaster Doc-Fai Wong, founder of the Plum Blossom International Federation, will be conducting seminars in Chi Kung, empty-hand forms, push hands, and a dao form. Testing is Friday night.

We're also having our first Italian banquet. Rather than book a Chinese restaurant, we decided to be different this year and go to Bucca di Beppo.

If you're interested in Chinese martial arts, look up www.chinatown-taichi.com for more information.
Posted by a2z at Thursday, September 21, 2006 No comments:

I only started this because I wanted to make a comment on the guy who works for the Pioneer Press and gets paid to eat only food-on-a-stick for 10 days. I want that job.

Check in later to see what else I can think up.