More Animals We Saw in Jamaica

One of our side trips was to the Black River where we rode on a pontoon boat. David took this first photo of an egret. These egrets seemed larger than the ones in Minnesota, but for all I know, it's a Minnesota egret wintering in Jamaica. Who knows? There were also several nestlings but none of our photos of them turned out. 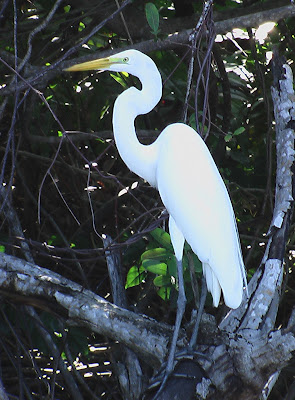 This next is a fresh-water crocodile. I hadn't been aware they lived in Jamaica until our horseback ride at the Rhodes Hall Plantation, northeast of Negril. This photo is of a croc on the Black River. The tour guide was able to reach his hand under the croc's chin and lift it up. I suspect they keep the crocodiles well fed so they won't nibble on tour guide "finger food." Look at those teeth! 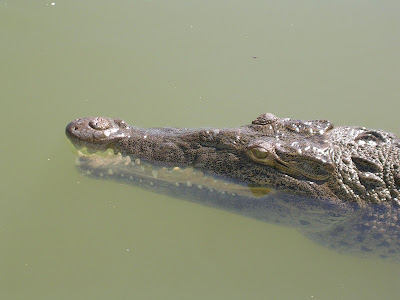 This peacock is located at Rhodes Hall. I didn't even try to get it to spread its tail (you tai chi types should understand that statement). 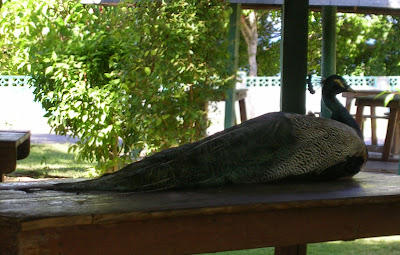 Paz is a donkey at the Appleton Rum Factory. (That's a fun link. Cruise around to look at all the chances to win a trip to Jamaica.) They used to use donkeys to turn the sugar cane squisher (I have no idea what its real name should be). They'd have two donkeys walking in an endless circle while the cane was fed into the squisher and cane juice would come out the other end. 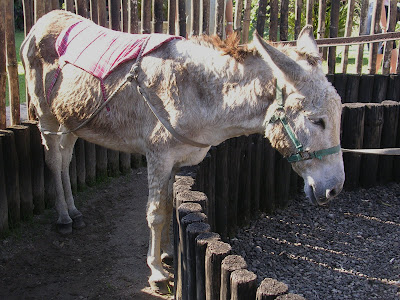 At the end of the factory tour, we came to another cane squisher. Guess who volunteered to be a donkey! The cane juice was sweet but otherwise had little flavor.

This is one of two kittens at the LTU pub, just south of where we were staying. LTU served, of all things, veiner schnitzel, which David said was quite good. Anyway, neither of these kitties was tame but would come up to you if you had food in your hand. Then they would bat at your hand to try to make you drop the food (only one claw came out when I wouldn't drop my bite of lobster). I suspect the cats are kept for catching mice and other vermin. Must be doing a great job. I didn't see any vermin. 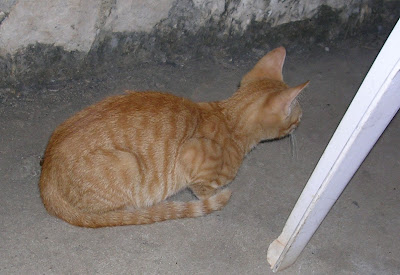 There was another horseback riding place just below YS Falls. I'll put more photos from our trip to YS Falls later. You already saw one if you checked out my Christmas day entry. 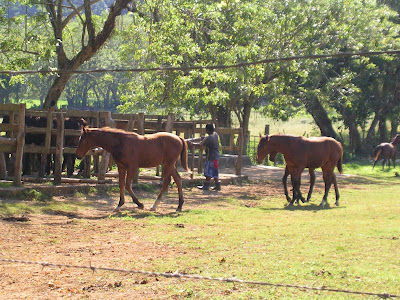 And to end the list, this is a gecko. Years ago, when we were in Jamaica, the resort had many of these little guys. I got used to seeing them hanging on the walls in the bathroom. They would eat the little bugs that came in. This is the only gecko I saw this trip. And there were a lot of little, teeny, tiny, itty-bitty ant-looking bugs. They were light in color and maybe a millimeter long. I tried to invite this fellow in, but he didn't seem interested. 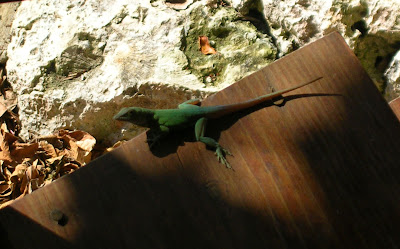