The resort where we stayed in Negril, Jamaica, uses dogs for security. Twenty-one years ago, they were German Shephards. Now there are two Rhodesian Ridgebacks and a Mongrel of some sort.

Ridgebacks are identified by the well-defined ridge of hair growing backward toward their heads. They are quite large dogs, weighing 80-90 pounds and standing 25-27 inches tall. 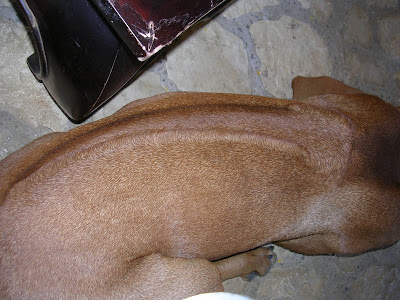 - - - - - - - - - -
This is Sugar, or, as the Jamaicans who worked there pronounced it, Sugah. We were told she was pregnant but it is too early for us to see. She is the youngest of the three dogs and the most playful and most alert. When someone comes onto the property that she hasn't been introduced to, she stands tall and makes a couple hearty barks of warning. Then she loses interest and lies down. I do not want to think what she might do if she didn't want you to be there. 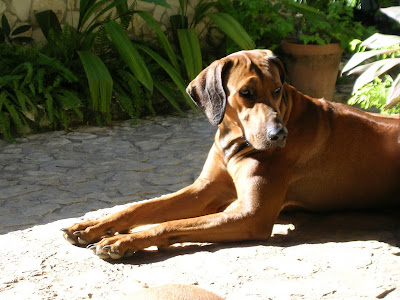 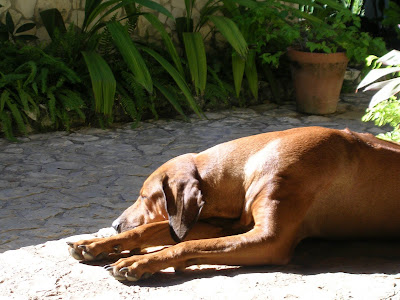 - - - - - - - - - -
And here's Bella. She's the oldest of the three and mostly mutt, I think. Sugah often tries to get Bella to play and Bella doesn't seem interested. 90 percent of the time, Bella can be found on the patio in front of the office with the other dogs, but lying in the shade. 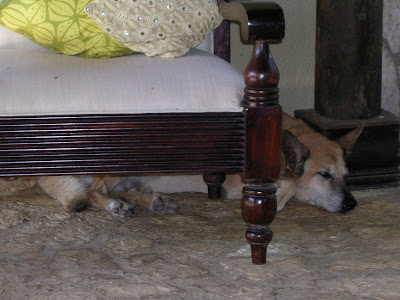 A nice assessment of the dogs and their roles. They need not be as vigilant as before as the physical security of the place is better. There is also a human at the gate too, 24/7. I believe Bela was a pup in '94 when we were there last. She was the bottom of the pecking order then too, but for different reasons. Now she is most senior dog but that doesn't pull much weight.