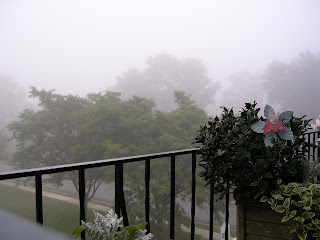 We haven't gotten much fog in the last few years. Don't know why. Too dry, maybe. Well, lately we've gotten more than enough rain, at least in some parts of the state, to make up for the drought. Lawns are looking much greener. Pastures, too. Too late for corn, however.

The southern part of the state, if you watch the news, has gotten so much rain they been flood out in areas that normally never flood. It's a real shame. Several people died.

Anyway, I like the fog. I remember many trips to the University of Illinois when I was dating my first husband, Steve, when it would be so foggy you could hardly see to drive. Walking in the fog felt cozy and closed in. It's hard to explain. But I liked it.

On another topic...after 3 tune-ups with the hearing aid guy, Jim, I'm starting to get the hang of hearing things again. I didn't realize how poor my hearing was until I got these things.

There are still some kinks to work out. One that has gotten better (but not great yet) is hearing trumpets and flutes in music. My hearing aids think they are hearing feedback and try to mask the sound. As a result, they play along with the music, but not in tune. It is most annoying.

The auto-program is working better now that the sensitivity has been turned down. Also, he made the transition more gradual between the "regular" and "party noise" modes so it's not so shockingly abrupt. Granted, I paid about $150 more for these than my 1996 Saturn 2 years ago. So they ought to work well.

The technician (I think that's what you'd call him), Jim, is a really nice guy. For one thing, he drives a Gold Wing motorcycle. Can't be all bad, huh? And he attends a church not unlike Eagle Brook.

Now if I can just convince the people who are used to SHOUTING around me to pipe down, I'll be happy.
Posted by a2z at Thursday, August 23, 2007

I'm looking forward to your next barbershop quartet/chorus event. Is it possible to enjoy 4 part harmony even more??