Twins Game - Indoors out of the Rain! 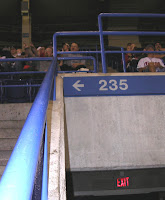 Here we are at the Dome. Free tickets (because I own a Saturn). Translate "Cheap Seats." That's what it said on the tickets, honest! 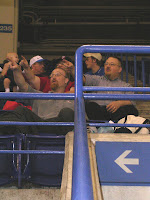 I climbed up a few steps to get a better photo of Ben, the one in front, Betty, hidden behind him, and James, on the right with the mustache, pretending to be fascinated by a game play. 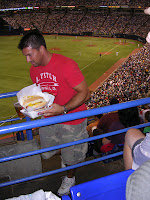 This fellow's name is Doug. He sat in front of us and pretended to be "protecting" my jacket, purse, and knitting bag, which were in the chair directly in front of me. 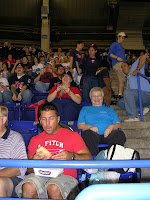 Here's a better shot of Doug, ripping the bun off his hot dog. At first I thought he must be a health nut. He was all muscles. Then I realized those weren't muscles. Those were his brains. Later on he was poking tobakee into his lip and spitting into a not-quite-empty beer glass. Yuck.

That's me up and to the right behind him. The one with the silly grin. Betty is in the red shirt and knitting. 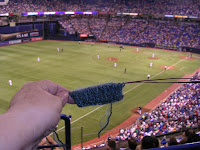 I took my right mitten to the game. I finished the left mitten which I worked on at the last game I attended. 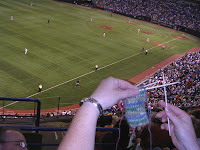 Here's Betty's knitting. I think it's a mitten but it looks kinda skinny. 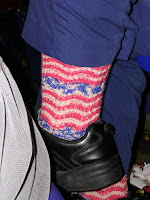 Betty finished her American flag sox. Aren't they cool?! The yarn created the pattern and looks a lot like stars and stripes. 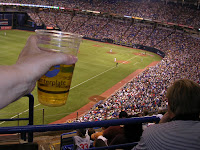 I didn't knit a whole lot because of tennis elbow which I get from working on a computer all day. Oh, and because the beer would have messed up my knitting. 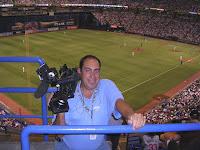 This fellow has a mega professional-looking camera and was taking videos of a little girl. I don't know if it was some sort of make-a-wish thing or not. I didn't ask. But he was nice enough, while blocking some of my view of the field, to let me take his picture.


And this is Betty and James. James is a friend of Ben's. Nice fellow.
The Twins lost 2-7 to the Seattle Mariners. I've never had the opportunity to watch them actually win a game. 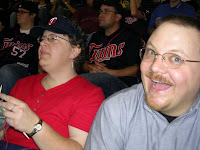