Although David isn't Irish, I am. Our family, McConnell, was part of the English effort to force Scots into Ireland to take the land away from the Catholics. It wasn't our fault. And my family wasn't there all that long anyway. The family myth is there was a dispute over the ownership of a horse so in the late 1700s my great, great, greats came to America. My son is more into Scotland. I want to go to Ireland.

At any rate, a good draught of Guinness was in order. Guiness isn't charged with carbon dioxide like most other beers. They use nitrogen. So Guiness came up with The Widget. If you look down the bottle neck, you can see the widget floating in the suds. I looked into an empty bottle and realized that while it slips into the bottle before filling and capping, it won't come out when you drink. When you open the bottle, it expands so it can't come too high up the bottle neck. Very clever, those Irish.

And of course, we needed to have corned beef and cabbage. I haven't made this in a LONG time, like 20+ years, but it came out OK I think. And Rainbow foods was kind enough to have a delicious chocolate and green cake. It was spendy but yummy. (And this was the first collaborative cooking David and I have done without coming close to blows. We each have different ways of doing things, ifyouknowwhatImean.) 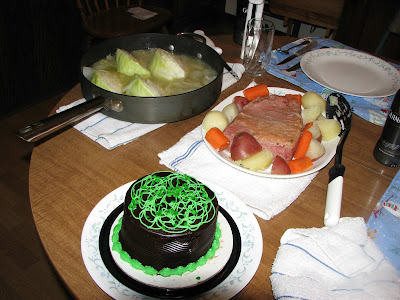 Gotta run off to work now. Had to stay late last night to get ready for our do-or-die software test this week. Hope I did enough.
Posted by a2z at Tuesday, March 18, 2008

A correction: David is about 1/8 Irish. He was not told this until he was about 30 years old and only then by his somewhat ashamed Mother. Seems that having Irish blood in an English family was not something to be proud of in the early years of the past century.
PS - Food photos by Dave. Few of life's pleasures are more ephemeral than the food we eat. How better to remember it than with photos.