Friday night, May 2, was the 2008 Land O' Lakes District International Quartet Semi-Finals. 14 quartets competed and 6 made it to the finals on Saturday evening. The event was hosted by the La Crosse Coulee Chordsmen chorus and took place in West Salem, Wisconsin. The event was well-run and the only hitch was when 2 of the judges, coming through Chicago, were held up by weather.

On Saturday morning (if you can call 11:30 a.m. morning) there were 10 choruses competing. The Southwest and 10,000 Lakes Divisions were represented. I was most interested in the 10,000 Lakes Division because the Great Northern Union (GNU) is a part of that group, as is the Minneapolis chorus, the Commodores.

GNU came in with 1009 points, the Commodores with 906. In all there were 4 choruses that qualified for the fall District contest. Winning then gets them into the International competition in 2009.

Saturday night 6 quartets from Friday night competed a second time. After Midnight, Vocality, and Main Street Station all got enough points to qualify for the International Quartet Contest in July.

Unfortunately, no photos of the contests themselves.

Betty and I went over to Lumber-Jack's Saloon in the Stoney Creek Inn after the contest winners and point spreads were announced.

This is Vocality. Jay, Tony, Bob, and Dave really know how to put on a show. 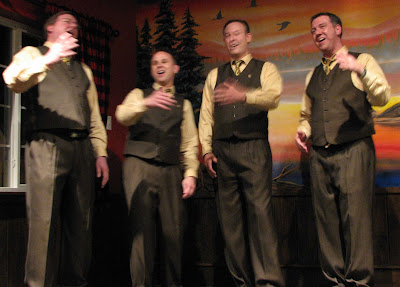 Main Street Station has Matt, Colin, Patrick, and Steve. Nice guys and we were so lucky to get front-row seats. 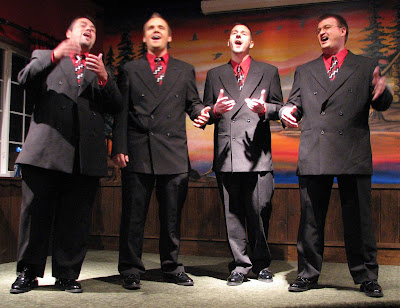 Gold Rush is always fun. Their web address is http://prettygoodquartet.com/
Steve, Cleon, Steve, and Steve. One of the Steves is a twin. He sings bass and his brother Rick sings baritone. 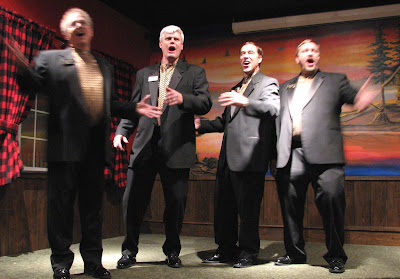 Have you noticed that the photos are a bit blurry? They're singing and moving around and basically hamming it up.

This is After Midnight, my personal favorite (at least for the moment). When you click this link, after a moment or two, you get to hear them singing. I'm currently listening to "Linda." Tom, David, Jim, and Steve.

I confess I put my camera on video for one of After Midnight's songs. It's lovely. I hesitate to put it on the web because of copyright stuff and because I don't have their permission. 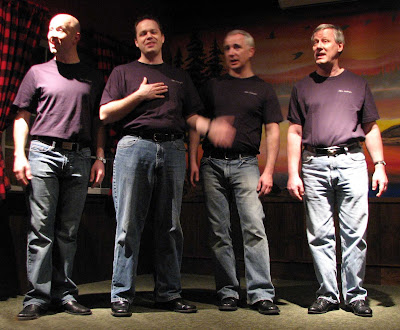 This is Dave and Julie being kind enough to make friends with my "traveling socks." They often ride their GoldWing motorcycle, but because of the cold and rain, decided to drive a real car instead. We've run into them several times over the years. 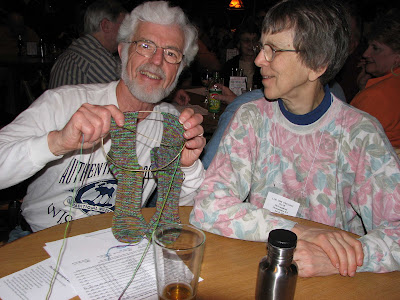 And of course, there's John. Betty and I had dinner with him in Winnipeg a year ago because his wife wasn't able to come to the contest with him. Very nice fellow. And he's nice to socks, too. 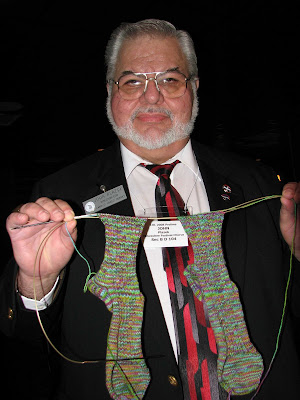 Main Street Station was willing to hold my socks, too. They seemed to be quite amused by the whole idea. 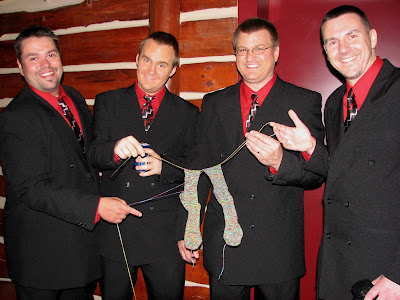 After Midnight seemed befuddled at first, too, but willing to humor the old lady. Thanks everyone for showing my socks a good time. I'll wear them to the fall contest in Appleton, WI. 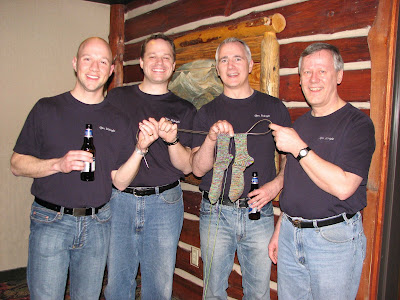