Last weekend (October 24 and 25, 2008) was the Fall Competition of the Land o' Lakes Division of the Barbershop Harmony Society. It was held at the Performing Arts Center in Appleton, Wisconsin. Friday evening there were 17 quartets competing for the top 10 spots for the final competition Saturday evening. Saturday during the day 17 choruses competed for the district championship and the chance to travel to the International Competition this summer.

As usual, I went with Betty. She takes notes and I should. I didn't post this right away and wish I had because the details like names have faded. First Tony Hillerman passed away and I had to say something about it and then, because I sit at a computer all day every day, coming home to do more of that is, well, not appealing.

This first is of a chorus that did a great job in the costume and acting department as well as very good singing. 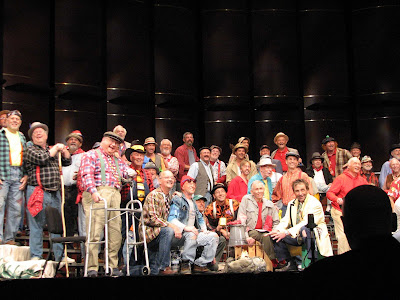 Our favorite, the Great Northern Union (GNU) won the contest with very high scores. I figured out how to turn off the lights that come on when I take photographs fairly late in the day, but I haven't yet figured out how to take good pictures on stage. The previous picture came out OK because they were closer to the front of the stage and multi-colored. The GNU were wearing black and so the white of their faces washed out. I could have zoomed in but wanted to show there were 70 men on stage. 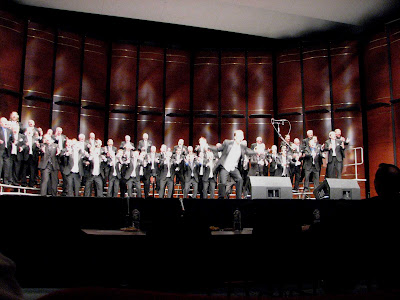 The Midwest Vocal Express, Greendale, Wisconsin, gave the GNU a real "run for their money." They are known for their skits and this year was no exception. They were dressed as penguins and did a wonderful job. 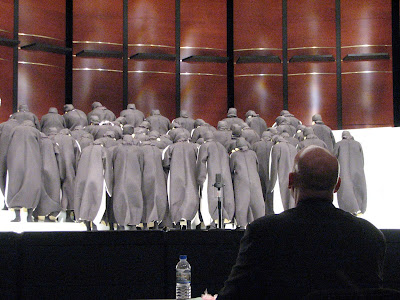 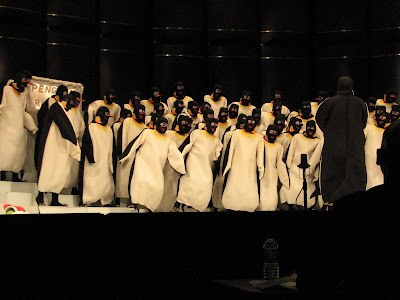 This is the part of the skit where they were lamenting that having pizza delivered is just not a good idea.
What I want to know is why isn't the UPS guy covered with ice? 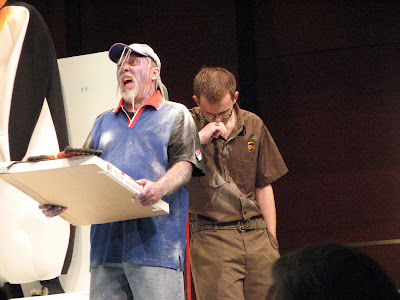 The quartet finals were also very close. There were 3 quartets I thought could have won. I'm glad I'm not a judge. Here's a photo of the judges. We were sitting in the second row because we registered at the spring contest. 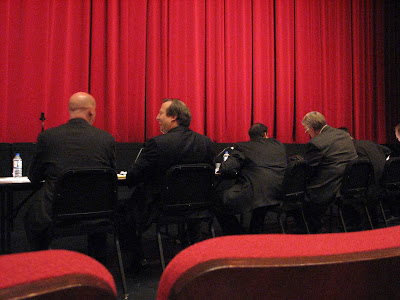 I zoomed in on the GNU to show the twins. They don't look as much alike as they used to. They are the second and third from the right in front in this photo. One sings with the Happiness Emporium quartet and we think he's letting his hair show the gray so he'll fit it in the other three older fellows. He also weighs a bit more than his brother. At first I thought it was his brother who sang with the Happiness Emporium but that's because when I first heard that group, 12 or so years ago, he was thinner and didn't have gray hair. Betty set me straight on that one. 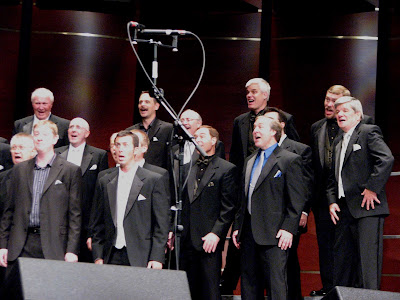 I put the yellow smiley face on this photo so as not to embarrass the singer. We thought maybe somebody should have told him about his hair and fixed it for him. 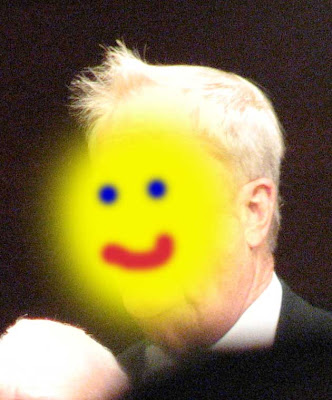 Considering this is barbershop music, you'd think there'd be more handlebar mustaches. Out of the 690 men on stage I counted 4 period-appropriate mustaches. I liked this fellow's. 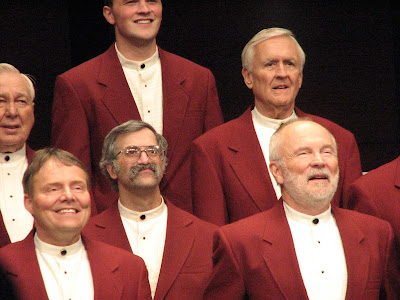 The out-going quartet champions from 2007 were Vocality. They put on a great performance while the scores were being tallied. 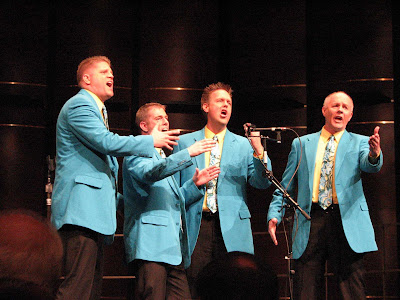 When we weren't busy watching the stage, we knitted. It doesn't look like I accomplished much, but my stole is 20 inches wide. Betty went from the marker to the left up the ribbing of her sock. 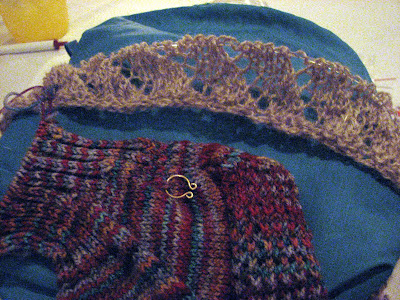 At first, I thought going here would be a fun idea. But in the evening, there were many smokers hanging out on the sidewalk in front of the place and it stopped appealing to me. 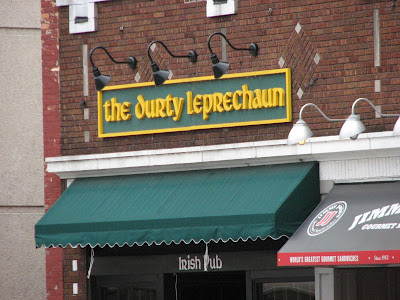 Saturday night's restaurant was Victoria's. The food was plentiful and delicious. We each ordered a slab of ribeye steak and a platter of pasta. They have a list of maybe 20 different types of pasta you can choose from.
Here's Betty's: 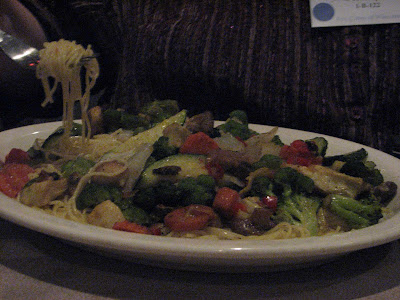 This is my steak and seafood pasta. 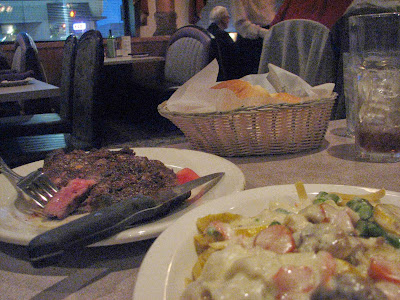 Ordinarily you'd expect a couple cups of noodles but it was a platter of noodles. We brought half of it to put into the trunk of the car.
I only bought one skein of full-priced yarn. It is hand-dyed silk and yummy. I also scored some $3 skeins of feltable wool for ... something. I shopped the stores along College Ave and was really disappointed. There are tons of bars and empty storefronts and very few shops actually open, at least within walking distance of the hotel. The fall trip has more than once been Christmas shopping time. Oh well.

So, now I have to learn more about my camera. One thing it does if you use the flash is overpower the photo and wash it out. So I sometimes don't use it, as on the last few. As a result, they end up grainy. Gotta work on that.
Posted by a2z at Saturday, November 01, 2008

Great report april! The first chorus is the Minneapolis Commodores. The chorus exhibiting the moustache example is the Fargo-Moorehead Great Plains of Harmony. You have the Hilltop, MN, chapter's Great Northern Union chorus, of course. And Midwest Vocal Express of Greendale, WI, were penguins this year.

I bought more yarn than april, this time! I haven't put any of it on the needles yet since I'm trying to finish a few more things first. The sock is getting close to completion then I'll start some Christmas/holiday exchange items.

For those who care about such, mine was the Creation Sauce with pasta and ribeye. Yummmm. Supper that night and the leftovers made two more meals for me! Visit Victoria's when in Appleton, WI, if you have the chance.

No photos are included but on the drive back home we stopped at a farm advertising pumpkins and sweet potatoes (I really, really like baked sweet potatoes). While I haven't eaten those yet, the Wisconsin grown pears are delicious!

Only six months until the LOL Spring Contest and Convention! :-)