Christmas used to be fun

When I was a kid, there was all the hype, sparkle, and promise. When I was really little, my parents always had an open house on Christmas Eve. Charlie and Ruth and Eleanor and Hubert would come. They were cool people and nice to me. My Aunt Dorothy and Uncle Marvin would show up later in the evening after they'd visited with Dorothy's family.

Uncle Ted MacMichael (not really my uncle) came for several years. He was great. I don't even know if he had kids of his own. Anyway, he was a singer with the Merry Macs. Google them, if you want. I felt really special around him.

Mom would boil shrimp the day before and chill them with lemon juice. She had real sea shells, large clams of some sort, kind of cream/beige/pink in color and about 4 inches across. On Christmas Eve day she'd mix up a sauce recipe she got from Ricardo's in downtown Chicago back in the late '40s or '50s. I still have the original hand-written recipe Chef Ricardo wrote on the menu. Anyway, it was sort of like 1,000 island dressing. She'd put the shrimp in the shells, pour the dressing over them, and sprinkle garlic flavored bread crumbs on the tops. Everything would go under the broiler for a little while (I'm not giving away the entire recipe here) till the bread crumbs were brown and the shrimp were hot.

I don't remember if anyone else brought food. Mom would have pitted black olives (I still can't get enough of them) and creamed herring (yum).There was other stuff but these are the foods that stand out. Oh, and we'd have egg nog. I have Mom's egg nog bowl and cups. It was always yummy. I don't know if it came in a bottle or carton like it does today. I don't know if she made it herself. When I was really little, Mom was a great cook.

Things changed as I got older. Mom would drink more. Everyone would drink more. Charlie and Ruth moved to Florida. Eleanor and Hubert moved to California. Uncle Ted went to California, too, I think. The ones we could always count on were Aunt Dorothy and Uncle Marvin. And Debbie. She was/is five years younger and I. Or, the way I saw it, I was five years Older than she was.

I don't want to go into the details of why things stopped feeling magical at Christmas. It just did.

As an adult I grew to hate the fall. I'd spend hours in the garden over the summer making vegetables and flowers grow. In the fall, everything would die or grow dormant. Days would grow short...and cold. In the 1970s and '80s at least we'd get enough snow to "make the season bright" so to speak.

Now, I don't have a garden to die. Just a tomato plant and some ratty petunias on my balcony. On the bright side, my 35-year-old Christmas cactus has one flower on it. It's the first in a couple years. Its cold out and we have just enough snow to cover the grass. It gets dark early. It's cold out. I am glum. Sorry.

In the past several years I've turned into a hermit. More than four people is a crowd. I don't like crowds any more. I've decided not to go attend Christmas with the extended family this year. I have nothing against them. That's not it. I'm not sure what I want but being part of a crowd isn't it. And David won't be around. He's going to visit his mother in Arizona. 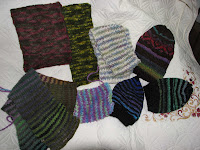 I don't have much money this year because of the extra costs involved with my new shoulder. But I have Stash...so I've been knitting up a storm. I'd intended to start after my shoulder surgery in August on Christmas gifts but I couldn't really knit for a couple months. I'm way behind.

I find myself knocked about by unfulfilled expectations this time of year. And I don't even know about the blasted expectation until the sadness/grief/discontent strikes. Hrmph. On the other hand, my neighbor's light display is delightful! So is that assortment of finished objects you have!

Beautiful hats and scraves! I'm working on my cross-stitching..it's simplier. You've got some talent!!!