Santana was at the Excel Center this evening. We were in row 38 left on the floor, seats 5 and 6. Pretty good, actually. The stage wasn't up as high above the floor as it was when Manilow was here so when people stood up, which they did often, it was much more difficult to see. I'm not the tallest person who was there, by any means. Saw a friend from tai chi there. Small world. 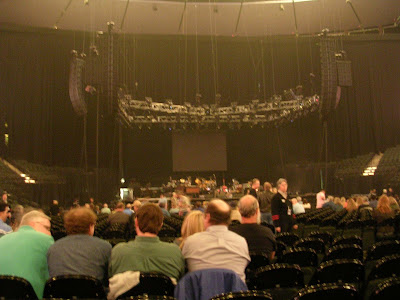 The opening act had the unlikely name of The Derek Trucks Band. Derek Trucks is a pretty good guitar player and definitely liked by Carlos Santana himself. Santana came on stage during the opening act to play with Derek and also had Derek come out during Santana's show. 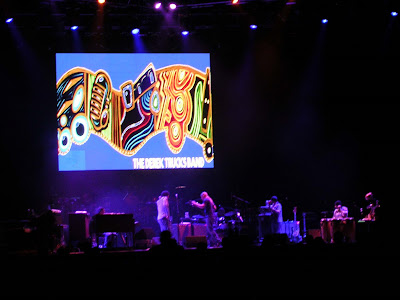 It's difficult taking photos in low light. I didn't have my "new" camera because I just didn't want to carry such a large thing. So my older little one sufficed. David had the great idea of setting it on "museum" so it opened up and did better. Still blurry but everyone was moving. 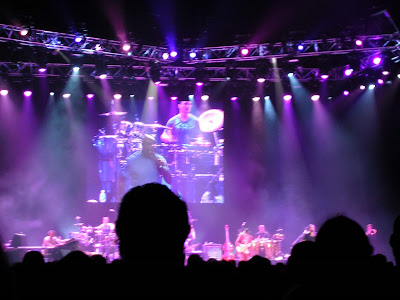 And here's a blurry shot of Carlos Santana playing. What I really liked about him this evening is that he didn't steal the show from the other players in the band. He'd stand in the back and let different people take the spot light. Great bone player (trombone, for those of you who don't know that slang word). Two great conga drummers. Great guitar, keyboard, and base players, too. 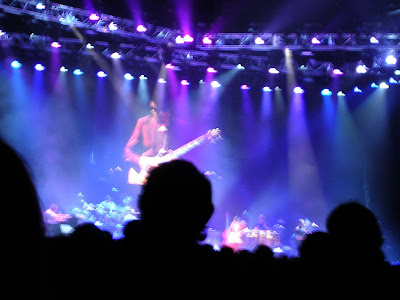 Santana's primary theme for this tour is peace. Stop shouting my religion is the only one, stop the war, struggle for peace. Let's all get along.
Posted by a2z at Sunday, April 20, 2008