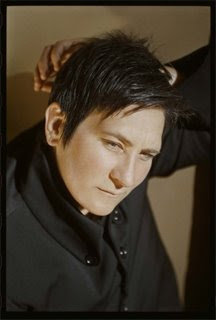 Wow! What a concert! It was worth every penny I paid for it, and I paid several. k. d. lang has a beautiful voice and a powerful set of lungs. She has great control over volume and sings well whether it's a quiet piece or she's belting the notes out there.

With apologies to Jeri Heiden, who took the photo, I couldn't help but steal it to put here.

My first impression when ms. lang strode onstage was, she's really put on a few pounds. But then, so have I. I soon forgot about it as she began to entertain us.

She had five great guys backing her up, a fellow from Brazil, a fellow she said was French, the drummer, base player, and someone she called the "man child" who was three years old when she cut her first album. Since there was no printed program, I don't remember any of their names. They were, however, outstanding. The base player would switch between upright acoustic base and electric. I love the upright base sound.

She sang three of my favorites from Ingenue which came out in, I think she said, 1994. It was my first exposure to k. d. lang and I love every song on that album. She did a very interesting "girl dance" when she sang Miss Chatelaine. It was quite comedic but I think that was intentional. She also sang A Kiss to Build a Dream On from the album she recorded with Tony Bennett.

I can't say enough good things about this concert. O'Shaughnessy Auditorium at St. Kate's in St. Paul has great acoustics. We were smack in the center of the fifth row of the balcony. David and I had a great time.

Warning to my co-worker Duane: I'll be singing along to k. d. lang tomorrow at work and probably throughout the week. I'll try to sing softly.
Posted by a2z at Sunday, October 19, 2008

I can attest to a most amazing evening of music and fun. Thanks april for taking me along to see ms. lang and to experience such an appreciative audience. It seems that many shared more than a love of music with k d if you know what I mean...

PS - I believe the word you want is bass (not) base.

thanks for the reviews and comments. i'm going to see her in connecticut next week and looking forward to it. i always say she can't do better than that and she always does.